Home > LOCALHISTORY > JEWISH_HISTORY_COLLECTIONS > Portraits of the Past: The Jews of Portland 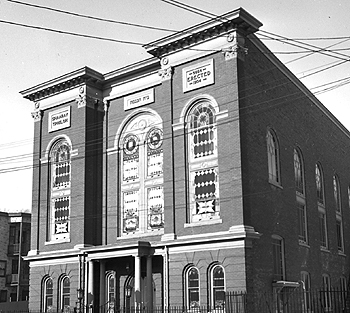 Portraits of the Past: The Jews of Portland

Portraits of the Past: The Jews of Portland / Dr. Konnilyn G. Feig, Director, Commissioned by the Jewish Community Center, 1976.
and
The Oral History Project of Documenting Maine Jewry
Supported by the Maine Humanities Council, 2009

The Jewish Bicentennial Committee was formed in 1975 by the Jewish Federation of Southern Maine to plan an appropriate way to celebrate the Bicentennial. After much deliberation over the best way in which to do so, the decision was made to create an oral history folklore of Portland Jewry.

Forty-four Portland Jewish residents were interviewed, the majority over the age of fifty and born of immigrant parents or were immigrants themselves. In reading or listening to these oral histories, one will learn of their backgrounds and family and community traditions, as well as the contributions they have made within the Greater Portland area.