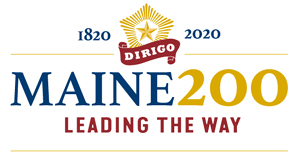 For the State of Maine, the year 2020 signifies the Bicentennial anniversary of statehood. On March 15, 1820, the District of Maine separated from the Commonwealth of Massachusetts to form the 23rd State. This was also the date of the Missouri Compromise. Maine's constitutional convention was held at Portland's First Parish Church, and the document was approved by the United States Congress on March 3, 1820.

Maine history surely predates 1820, including the ages of exploration, the development of farmlands and fisheries, and the growth of settlements into towns and cities. Maine people served in the Revolutionary War, as well as in the War of 1812. For the occasion of Maine's Bicentennial, cultural institutions throughout the state are highlighting unique resources and collections. Portland Public Library is among the participating cultural institutions.