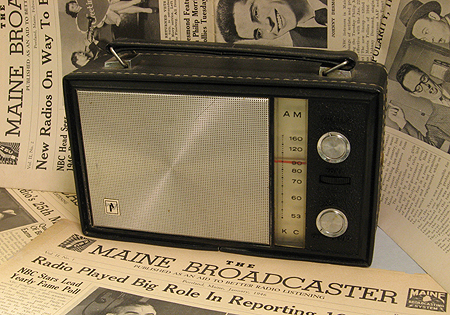 The motto of The Maine Broadcaster was "Published as an Aid to Better Radio Listening." The newspaper-sized periodical was in publication from November 1945 - June 1949, and was published by the Maine Broadcasting System, which comprised commercial (NBC) AM radio stations WCSH Portland, WLBZ Bangor, and WRDO Augusta. Along with radio program listings, the Maine Broadcaster featured articles about national and regional radio stars and shows. As with any newspaper (a comparable in New York was the Radio Guide), coverage of radio-related news stories and technological advancements provide a real-time glimpse into the "golden age of radio," which lasted through the 1940s (prior to the increased popularity and availability of television).

Late-June 2021 update: Stay tuned, as this site is presently under construction.
Printing is not supported at the primary Gallery Thumbnail page. Please first navigate to a specific Image before printing.