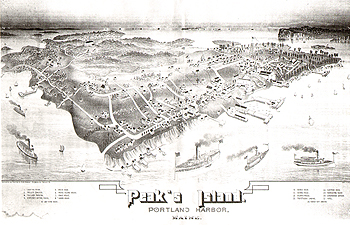 Among the scrapbooks in the Peaks Island Branch Library collection are 10 volumes of Peaks Island topics assembled by Hilda Shute. Hilda Unstead Shute and her husband Albert were born, raised and married in England and emigrated to New Brunswick, Canada in 1919. They entered the USA in 1921, arriving in Portland via the Grand Trunk Railroad from Montreal. They lived, worked, and raised a son in Portland, and she lived for some time in Peaks Island. She died in1972 and is buried with her husband in Pond Grove Cemetery, Peaks Island, where their epitaph reads: "There is a corner of a foreign field that is forever England”
Note: To see Hilda Shute's original scrapbooks, please visit the Fifth Maine Regiment Museum, on Peaks Island.
Printing is not supported at the primary Gallery Thumbnail page. Please first navigate to a specific Image before printing.