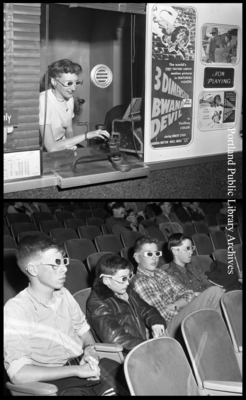 Article caption: "Portland Audience Views 3-D"
"Viewing Portland's first three-dimensional movie at the Empire Theatre, these four patrons prove a point. The theatre management has noticed people wearing the special eyeglasses don't turn to talk to each other much. They stay glued to the screen.
Theatre cashier Miss Colleen Foley of 11 Wilmot Street dons 3-D frames to 'view an added dimension' in attendance as crowds flocked to Portland's first movie in the new medium.
'I liked it, but I think when you get used to it you'd like it better,' says Alfred Marin of St. Agatha, a Biddeford College student. 'Pretty good' was the comment of Henry W. Arguin of Rochester, NH, a St. Francis College student. 'But I think Cinerama (wide view screen) is much better.' 'Quite sensational, but it bothered my eyes a little sometimes,' said Arthur Barry of Fort Kent, another Biddeford student. 'Yes, I ducked when the spear was thrown.'"

Photos published in the Portland Press Herald, on 27 March 1953.