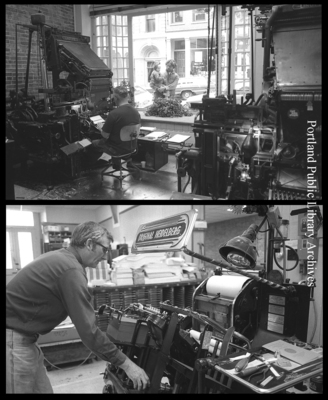 The printing company, also known as Southworth-Anthoensen Press used linotype composition, in the production of fine, limited-edition books.
Editions were also were composed by hand, including Rosenbach’s Early American Children’s Books.
The Press printed other notable bibliographies and catalogs such as Stillwell’s Incunabula in American Libraries. clientele included Bowdoin College and Colby College, the Boston Athenaeum, the Massachusetts Historical Society, the Limited Editions Club, and scholarly journals such as The New England Quarterly, The American Neptune, The Papers of the Bibliographical Society of
America, and The American Oxonian.

More about Anthoensen Press, from the Bowdoin College Library.

After the Press' closure in 1987, the editorial office's collection of books was donated to The Portland Room, at Portland Public Library.

Photos published in the Maine Sunday Telegram, on 4 October 1981.