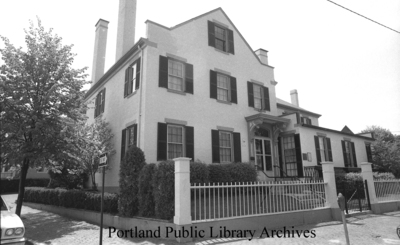 Text from Greater Portland Landmarks:
"Neal S. Dow (1840-1897) was a United States General, a leading Temperance advocate, Abolitionist, and prominent Republican political leader. Dow authored the "Maine Law", the first state act outlawing the sale and consumption of alcohol, which inspired similar legislation across the nation and resulted in the national implementation of Prohibition in 1920. Dow’s involvement in the Temperance movement catapulted him to international prominence, sparked his political career, and forever linked him with the history of American social reform. Dow’s family had a strong link to the Abolitionist movement, and provided refuge in the house for African-Americans who were fleeing slavery. In 1934, Dow’s son Fred gave the building to the Maine Woman’s Christian Temperance Union (WCTU) as its headquarters, to carry on the memory of his father and his work. The WCTU began in the early 1870s, focusing on social reform, especially the fight against alcohol consumption, which they saw as the major cause of poverty, family instability, and crime."