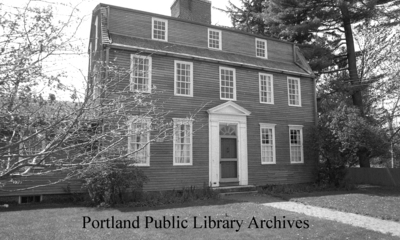 Exterior view of the Tate House, 1267 Westbrook Street, from northeast.

Built in 1755, "The house was constructed for Captain George Tate (1700-1794), who had arrived in the Colonies with his family around 1750. Captain Tate served as the Senior Mast Agent for the British Royal Navy, overseeing the cutting and shipping of white pines from Maine to England. His position bestowed upon him a prominent status in the community which is reflected in the style of architecture selected for this home. With its clapboards still unpainted, Tate House is one of two residences in Maine with an unusual subsumed dormer in the gambrel roof."
(descriptive text from the Tate House Museum)