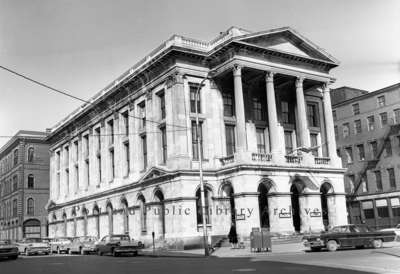 Full exterior view of United States Post Office building, 171 Middle Street, from south. The post office was built in 1871 of white Vermont marble, and was in use through 1934 (when the post office at 125 Forest Avenue was completed). Until the building's demolition in March 1965, it was used as offices for the U. S. Navy, and later as offices for the Veterans Administration.

Photo published in the Portland Press Herald, on 3 March 1964.