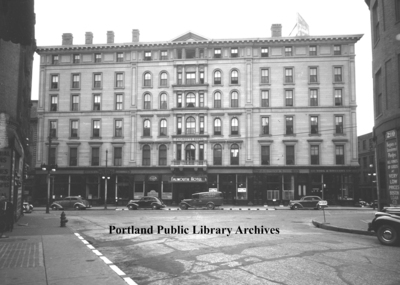 Full exterior view of the Falmouth Hotel, from north, 212 Middle Street. The hotel was between Plum Street and Union Street. Temple Street is in the foreground.

The hotel was built by John Bundy Brown (J.B. Brown), as a major symbol of the city's resurgence after the Great Fire of 1866. The Falmouth opened in 1868, reported in the Eastern Argus as follows:

"This noble structure that has arisen by the enterprise of our public-spirited citizen, John B. Brown, to fill with grandeur a desideratum that has long been felt by the traveling public visiting our beautiful city."

The Falmouth Hotel was considered one of the best examples of a rebuilding to exceed its predecessors, with its granite facade, black walnut high-ceilinged interiors, marble fireplaces, Great Rotunda, and the Billiard Room- described in the Argus as measuring "48 by 56 feet, elegantly painted and frescoed, and containing eight first-class tables from the manufactory of Amasa W. Bailey, Esq., of Boston." The hotel’s chairs were upholstered with Parisian fabric. The cost to build the magnificent hotel was a regal $300,000; a fortune for its day, considering that in 1868 a loaf of bread cost a nickel. Its builder and first owner, J.B. Brown moved on to developing portions of the Western Promenade area, and the 200-room "hotel of a million banquets," endured ownership changes, and continued in its prominence. As late as the 1950s, the Falmouth hosted major statewide political gatherings. The hotel’s register bore the signatures of five presidents: Grant, McKinley, Theodore Roosevelt, Harding, and Taft. By the early 1960s, the hotel fell on unfortunate times, and without a champion, the city took its ownership and by 1963, the Falmouth was demolished.
The site became the location of Canal Bank Plaza, in 1971.