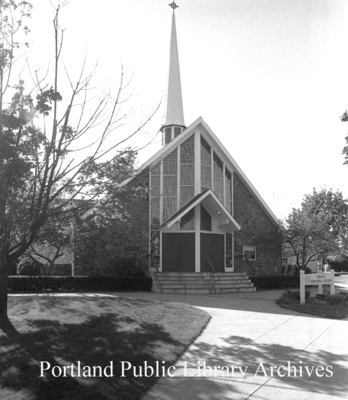 Exterior view of Trinity Episcopal Church, 580 Forest Avenue at Coyle Street, from east.
The chapel's construction (113 Coyle Street, visible on the left side of the photo) began in 1891, and was dedicated in 1896. At the time, Deering was a separate municipality from the city of Portland (the merger was in 1899). The chapel became known as a parish in 1911. In 1960, a wing was added to the original building. In 1965, an addition extended the original chapel, with its entrance on Coyle Street toward Forest Avenue.

Photo published in the Portland Press Herald, on 21 September 1991.