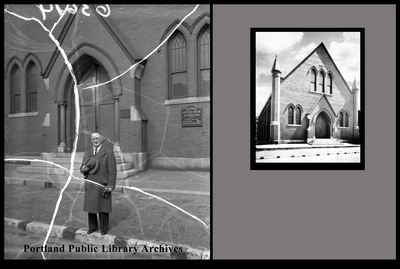 The Meeting House was built in 1850, and the congregation was a "programmed meeting," meaning the order of service was led by a pastor. In 1974, the Oak Street Friends congregation merged with the Portland Friends Meeting (1837 Forest Avenue).
The building at 83 Oak Street was later used as a dance hall, and was destroyed in a March 1980 fire.

Photo of Rev. Hughes published in the Portland Press Herald, on 7 April 1951