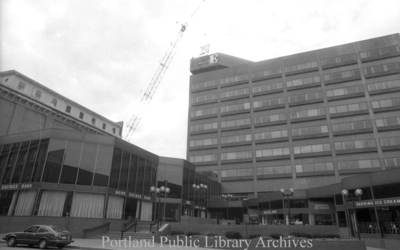 Businesses located in the lower level of Maine Savings Plaza included Bookland book store, and a Deering Ice Cream restaurant (at right in the photo).
At the top of the office building, the bank's "ONE" logo, based on the U.S. one-dollar bill motif, which was used on Maine Savings Bank advertisements and credit cards.

Photo published in the Portland Press Herald, on 26 July 1982

A full exterior view of the Plaza in 1997 can be seen at this link.