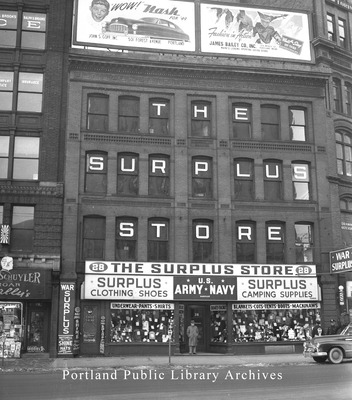 The Surplus Store was founded in Portland in October 1947 by Abraham "Al" Leibowitz, who set up shop at 28 Monument Square. After serving in the Army during World War II, Leibowitz went into the Army-Navy business largely on the strengths of the enormous amount of military surplus that was then available for civilian purchase.
"After the war, when there was a real shortage of things, it was an easy way to find affordable clothing," said Larry Rose, a co- owner of the business whose father was an original partner.
The store closed at the end of 2004.

Photo published in the Portland Press Herald, on 10 March 1949