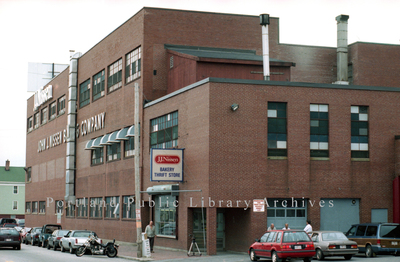 Full exterior view of J.J. Nissen Baking Company building, 59 Washington Avenue, viewed from east.
The core of the large building was built in 1947, expanding John J. (Jürgen Jepsen) Nissen's bakery, which began on Woodfords Corner (ca1900), later moving to a small shop at the Washington Avenue site in 1912. Nissen emigrated to Portland from Denmark; at the time Portland's East End and Bayside had a significant Scandinavian community.

At the company’s peak, employment reached 250 workers. By 1980, an average of 35 tractor-trailer trucks set forth from the 12 loading-dock bays on Washington Avenue, delivering nearly 200 varieties of baked goods. Nissen had grown to be the largest Maine wholesale baker, striking the balance between a local touch with large-production, outpacing counterparts in Lewiston (Lepage) and Waterville (Harris). Beyond the large markets and small grocery stores, there were Nissen outlets- notably the one at 43 Washington Avenue.

The Nissen Baking Company was sold to the national firm Interstate Bakeries, Inc., in 1997. Interstate closed the 2.9acre property in May 1999.

Photo published in the Portland Press Herald on 3 August 1995