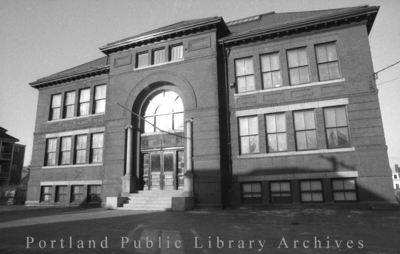 Full exterior view of Emerson School, 13 Emerson Street, from south. The elementary school closed at the end of the 1978-1979 academic year, and was purchased by Greater Portland Christian School (at the time, Portland Christian Academy) for use beginning in September 1979.
Subsequently in 1982, the building was converted into apartment housing.

Photo published in the Portland Press Herald, on 17 March 1979