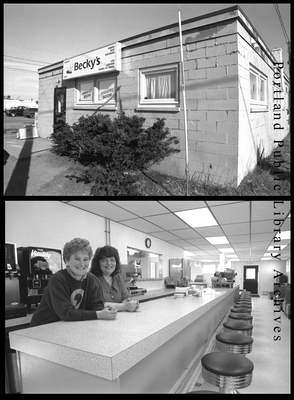 Views of Becky's Diner (also known as Becky's Restaurant), 390 Commercial Street (Hobson's Wharf). The photos were taken two days before the grand opening, which was on Wednesday 13 March 1991. The establishment created a debate in December 1990 on whether it conformed with City of Portland marine zoning laws.
At left: waitress Robin Ross.
At right: co-owner Rebecca Rand.

The building's footprint at 390 Commercial Street had been the site of New England Grain Company.
(Becky's Diner, in 2000, at this link.)

Bottom photo published in the Portland Press Herald, on 11 March 1991