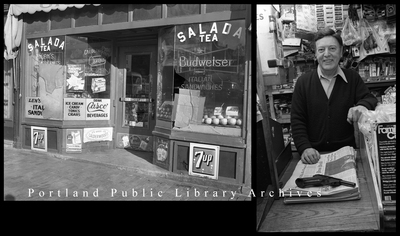 Views of Len's Market, 431 Cumberland Avenue. The store opened in 1941, owned by Leonard Stevens and his wife Elizabeth Stevens, continuing until Mr. Stevens retired in 1998. The building was demolished in 2003. Len Stevens died on 15 December 2003, and Elizabeth Stevens died on 27 November 2007.
Mr. Stevens was a decorated veteran who served with the 29th Infantry Division in World War II. He landed on Omaha Beach in Normandy on D-Day. He was seriously wounded in Mortain, France. Stevens was awarded the Bronze Star, the Silver Star and two Purple Hearts.

Left image: Exterior view of storefront entrance, after a break-in.
Photo published in the Evening Express, on 4 May 1960.