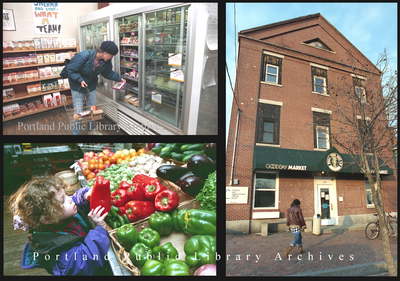 Views of the Good Day Market Natural Food Co-op, 155 Brackett Street. Located in the People's Building (photo at this link), which also housed the Portland West Neighborhood Council (photo at this link), the Good Day Market served as Portland's only cooperatively managed organically-grown food store. The market opened in 1970, in the Mariner's Church Building (370 Fore Street), later moving to 343A Fore Street in 1973. In 1979, the Good Day Market established itself at 155 Brackett Street, after the building (the former Brackett School) had been repurposed in 1978.
The large "Services & Items 4 Sale" bulletin board in the Market's entrance was a prominent part of the store's role as a community resource.
The Good Day Market relocated to 59 Middle Street in late-1995, and closed in 1997.

Photos published in the Portland Press Herald, on 5 April 1995