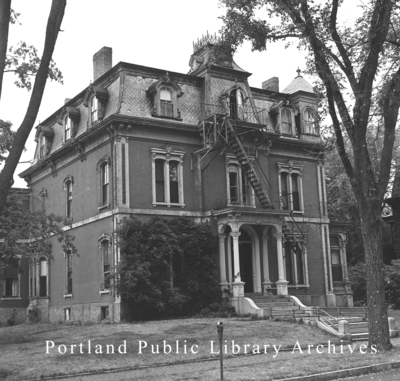 Full exterior view of the James Phinney Baxter House, 61 Deering Street, from south. The Baxter family's house, designed by architect William H. Anderson, was built in 1869. The house was demolished in 1974.
James Phinney Baxter (1831-1921) was among Portland's most prominent citizens, turning to philanthropic causes after his business successes- including the founding of the Portland Packing Company. He championed causes such as the preserving of land to create city parks in Portland, the Maine Historical Society, and sponsored the construction of the Portland Public Library (1889).

Photo published in the Evening Express, on 17 August 1966