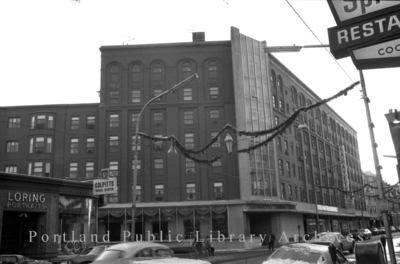 The Lafayette Hotel was built in 1903 by developer and hotel proprietor James Cunningham. The hotel was named after the Marquis de Lafayette, an important ally of George Washington during the American Revolution; at its opening, the hotel was decorated with French motifs. The building was constructed to be fireproof (with regard to the devastating fire Portland had endured less that forty years prior- in 1866), such that "underwriters had made the insurance rate lower than any other building in Portland," in 1903.

Photo published in the Portland Press Herald, on 3 January 1974

[See Additional Files link- below- for a print of the Lafayette Hotel, published in the Portland Sunday Telegram, on 7 June 1903.]