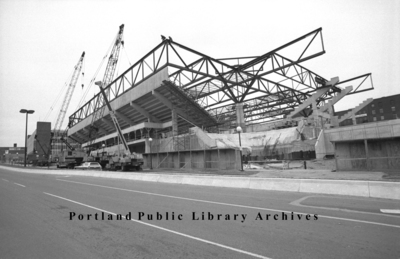 Full exterior view of the Cumberland County Civic Center during construction, from east, along Spring Street near Center Street.
The Civic Center complex was built on the site of the extinct E.T. Burrowes Company window and sash manufacture. The parking garage adjoining the Civic Center was built in May 1971, and the site for the arena itself was cleared by March 1973.
The groundbreaking ceremony for the Civic Center was on 7 January 1975, and the grand opening was on 5 March 1977.
Immediately following the opening of the modern arena, events during the spring and summer of 1977 included Ice Capades, The Harlem Globetrotters basketball, tennis tournaments, concerts by the Portland Symphony Orchestra, and the arrival of the Maine Mariners (of the American Hockey League) in October 1977. The Civic Center quickly became a rock concert destination as well.

Photo published in the Portland Press Herald, on 1 April 1976.