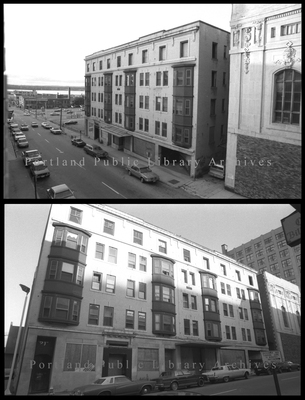 Exterior views of the Plaza Hotel (previously the Graymore Hotel), 21 Preble Street (between Cumberland Avenue and Congress Street).
The 152-room downtown hotel first opened in 1913 as The Graymore, and was renovated and renamed The Plaza Hotel in 1966.
The Graymore's lounge was The Continental Lounge (see link for interior view in 1961). As The Plaza, the lounge was renamed The Penguin Lounge, and later (beginning in 1979) The Downtown Lounge.
The building was damaged by a fire in October 1981, subsequently closing; it was demolished in 1985.