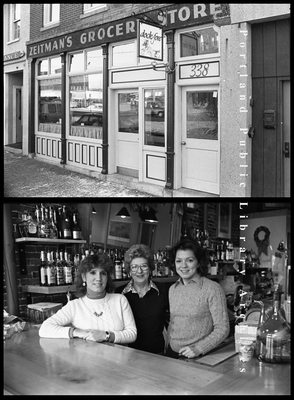 Views of Dock Fore tavern, 336 Fore Street. The pub opened in 1980 in the former Zeitman's Grocery Store space. Zeitman's had been in business for 60 years, owned by brothers Julius Zeitman and Jack Zeitman, and closed in 1979.
Dock Fore was opened by sisters Susan Hezlep and Nancy Hezlep, with their mother Lois Hezlep. The sisters had previously worked at J's Oyster Bar.

The building has a 4' high sea wall in the basement which runs beyond the breadth of the structure, as protection from harbor tides- dating back to when Fore Street was at the fore of the Portland waterfront. The Boothby Square block dates back to the late 18th century and early 19th.

Photos published in the Evening Express, on 29 December 1980

See Additional Files link (below) for the 1982 Dock Fore menu.