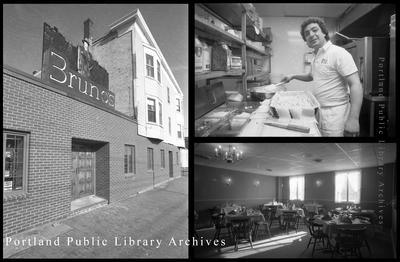 Views of Bruno's Tavern, 43 India Street. The business began as a bar in the Micucci's Grocery Store building in 1981, and moved into the 43 India Street space in 1985. According to Bruno's web site, "Bruno’s was the first kitchen in Portland to serve calzones. The steak and cheese sandwich, pizzas, and linguini with clam sauce became instant classics. Bruno’s was also the first bar to open a patio in Portland." By 1989, the restaurant relocated to 33 Allen Avenue.