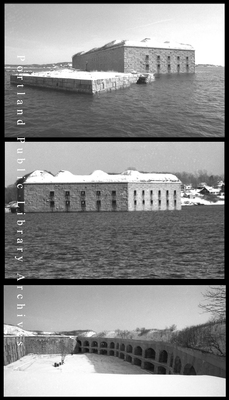 Views of Fort Gorges, in Casco Bay. Built between 1857 and 1865, the harbor fort was named after Sir Ferdinando Gorges (Governor of the Fort at Plymouth, ca.1606 and colonial proprietor of Maine), and is located east of Munjoy Hill and west of Great Diamond Island and Peaks Island. Its construction was intended as a post War of 1812 harbor defense, designed by Col. Ruben Staples Smart, inspired by Fort Sumter. During World War II, the U.S. Army used Fort Gorges as a storage place for submarine mines. The City of Portland acquired Fort Gorges in 1960, and has made the historic site accessible to the public.

Photos published in the Evening Express, on 14 February 1975.


A Great Diamond Island post card, showing Fort Gorges, can be seen at this link.