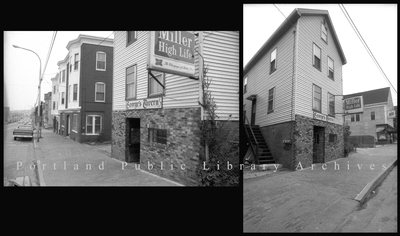 Of George's Tavern, local journalist Chris Busby (Casco Bay Weekly, 30 Dec 1999) wrote:
"George's would be a good place to weather the chaos and impending millennial apocalypse. It's built like a bunker and its front window is secured against rocks by a thick metal screen. Its stock of Slim Jims, potato chips, peanuts, and crackers could sustain a small band of survivalists until the beer runs out and life is no longer worth living."

Photos published in the Evening Express, on 17 June 1982