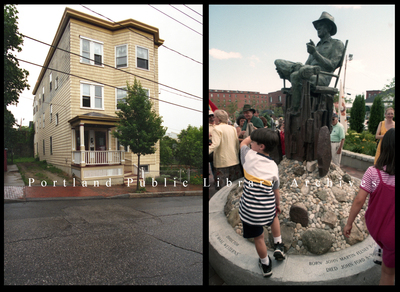 Full exterior view of building at 21-23 Sheridan Street, from southwest. The third-floor apartment, on the 23 side of the building, was the childhood home of six-time Oscar winning film director John Ford. Born John Martin Feeney on 1 February 1894 in Cape Elizabeth, the family subsequently moved to the building on Munjoy Hill and owned a store at 42 Center Street near Gorham's Corner. The latter location became the site of the John Ford statue, in 1998.

Right image: View of the John Ford memorial statue, Gorham's Corner (southeast corner of Pleasant Street and Center Street), on the day of its unveiling.
Photo published in the Portland Press Herald, on 13 July 1998.