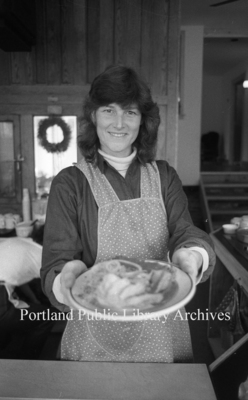 Carol Kilgore, serving at the Second Ceres restaurant, 21 Pleasant Street.
The space had previously been The Hungry Hunza restaurant, Second Ceres was in business from 1981-1983, and by early 1984 the space became home to Alberta's restaurant (where Alberta's was located through 1996).

Photo published in the Maine Sunday Telegram, on 13 December 1981

See Additional Files link, below, for a 1982 Second Ceres MENU