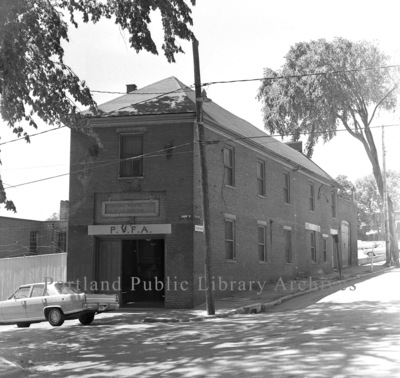 Built in 1836 as a firehouse for a neighborhood unit, Casco No.1, the building stood on the site of the old Mariner's Spring.It served as a firehouse until 1854, and as a school from 1854-1869, after which it was briefly used again as a firehouse. The building later housed a grocery store, and later a warehouse. Eventually the building became the location for the Portland Veteran Firemen's Association, housing the organization's historic artifacts and archives. The building was demolished shortly after this 1969 photograph, along with much of Spring Street, during the Model Cities urban renewal projects in Portland (ca.1967-1974).

Photo published in the Evening Express, on 16 June 1969