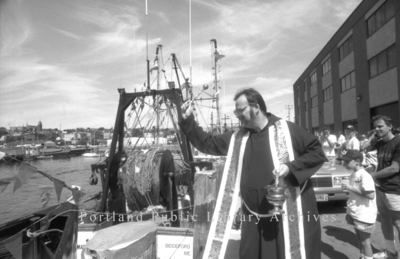 The Rev. Theodosius Corley, a Capuchin Franciscan priest from Saint Joseph's Roman Catholic Church in Portland, blesses fishing boats at the Portland Fish Pier during the annual Blessing of the Fleet, part of the Waterfront Festival. The Portland Waterfront Festival began in 1990, later renamed the Aucocisco festival, and continued until 1999.

In the article accompanying this photograph, journalist Tess Nacelewicz wrote:
"It was a solemn start for a festival: a priest sprinkling holy water across the bows of six draggers to keep them seaworthy and their crews safe, then saying a prayer for those lost at sea. But the overall tone of Portland's second annual Waterfront Festival was upbeat as a series of speakers praised Maine's fishermen and expressed hope for a strong future for the fishing industry."