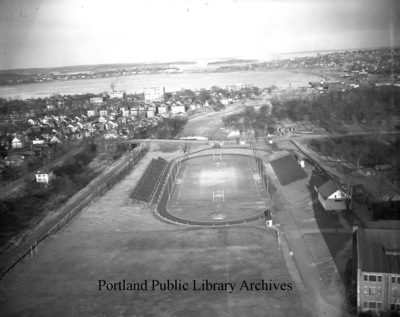 The Portland High School Stadium (renamed Fitzpatrick Stadium in 1989, honoring James J. Fitzpatrick), formerly known as Richardson Field, had been leased to Portland High School by the city in 1930. In 1931 a concrete grandstand was built, overlooking the football gridiron and a cinder track. In 1932 bleachers were built opposite the grandstand, giving the stadium a combined seating capacity of 8,250. In September 1960, Democratic presidential nominee John F. Kennedy spoke at the Stadium as part of his presidential campaign.

Photo published in the Portland Press Herald, on 5 December 1946