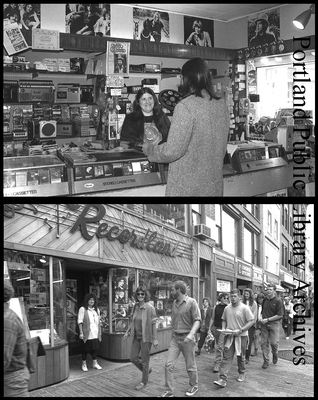 Top photo:
Ruth Baker, owner of Recordland, inside store.
Photo published in the Evening Express, on 10 May 1978.

"Ruth S. Baker, loving mother, grandmother and friend, passed away peacefully at home on Feb. 22, 2006 after a courageous battle with cancer.

Ruth was born Feb. 5, 1932, the only child of Charlotte Fineberg and attended Portland schools.

She was the long time owner and manager of Recordland, a well-known local record store exclusively to records and music operating from 1957-1991. Ruthie, as she was affectionately known, was a celebrity in her own right in Portland's music world. Her store was known locally as THE place to find any song a customer may need or want. She personally helped bring famous musicians to Portland, her favorite being Stan Kenton, who became her friend. Her customers loved her as a person, looked up to her as a mentor, admired her amazing musical knowledge and remained her special friends over the years. She loved them and that love was given back ten-fold especially during her illness.

When Ruthie retired and closed Recordland, she was recognized with a proclamation by the Portland City Council for her nearly 40 years of dedicated service to her customers and the business community. Ruthie was a successful businesswoman at a time when a few women owned and operated their own business."