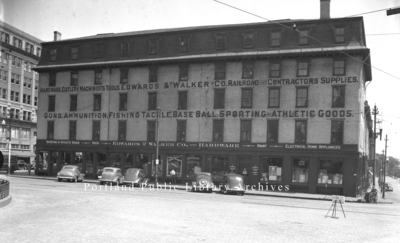 Full exterior view of Edwards and Walker hardware store, Monument Square, from west. The building had been the United States Hotel, in the 19th century, facing the Soldiers and Sailors Monument. It was demolished in December 1965, and became the site for the Casco Bank building (One Monument Square) in 1969.