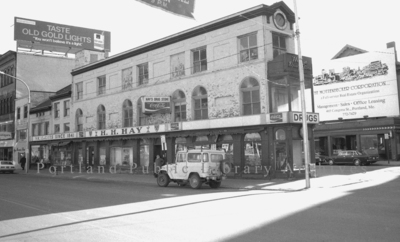 The H.H. Hay building (the "Upper Hay's," as the "Lower Hay's" drug store (in the Byron Greenough Block) was built at the northeast extremity of Free Street {262 Middle Street}) is also known at the Charles Quincy Clapp Block, named after the building's architect. Built in 1826, a third story designed by John Calvin Stevens was added in 1922.
In 1979, funding from a Federal Urban Development Action Grant (coinciding with the expansion of the Portland Museum of Art and the creation of Congress Square Park) was used for renovating and restoring the H.H. Hay Block.

Photo published in the Evening Express, on 28 February 1978

(Additional view of H.H. Hay Block, from southwest, at link below)