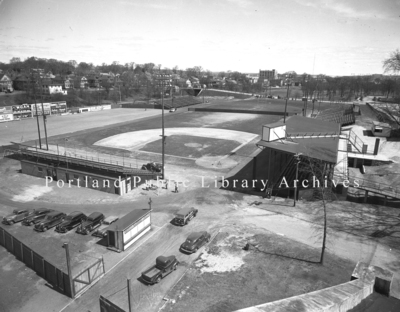 The occasion for this photograph was the completion of grandstand improvements, anticipating the Portland Pilots' baseball season. The Pilots were a New England League class B minor league baseball team, from 1946-1949. In 1947-48, the Pilots were managed by Maine native and former Brooklyn Dodgers player Del Bissonette.
Locals referred to home runs hit to left field, and left-center field as "out to Piker's Peak."
The ballpark's site later became that of Hadlock Field.

Photo published in the Portland Press Herald, on 4 May 1948

Additional photo at link below shows a Portland Pilots game in progress, with "Piker's Peak" in the background.