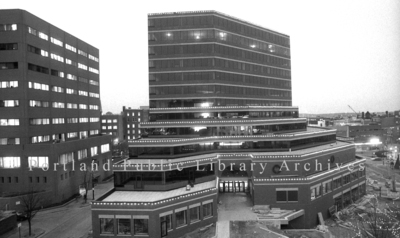 The footprint was popularly called "The Golden Triangle," flanked by Middle Street, Federal Street, and Temple Street immediately northeast of Monument Square (the western tip of the "triangle" in 1961 can be seen in this aerial photo) . In 1973, demolition of buildings within the triangle was completed, and the Middle Street perimeter was converted into a brick-paved walkway. The project included converting the Soldiers and Sailors Monument rotary into a connecting plaza. Initially, the proposed office building was to be called "One Maineway Plaza."
Portland's Farmers Market was located in the cleared Golden Triangle from the mid-1970s to the early 1980s.

A full exterior view of One City Center, from west on Monument Square in 1997 can be seen at this link.

Photo published in the Evening Express, on 23 December 1985