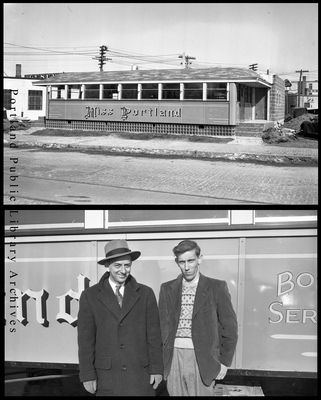 Views of Miss Portland Diner, 175 Forest Avenue, at the opening of the business.

Venuti (of Congress Street) and Crowder (of Oak Street), both Navy veterans, pooled together $50,000.00 to create the diner. They were out of touch with each other until Venuti read in a newspaper that Crowder was injured in an explosion aboard the tanker Diamond Island, in Portland harbor on 17 August 1946. Venuti visited his friend at the Marine Hospital (in Portland), and they later decided on the restaurant venture.

When it opened, Miss Portland diner had 18 counter stools and 7 booths to seat customers. The chef was Joseph J. Riley, of Noyes Street, formerly of State Drug Store.

A photo from 1988 of owner Randy Chassé can be seen at this link.

A photo from 1993 of owner Randy Chassé can be seen at this link.