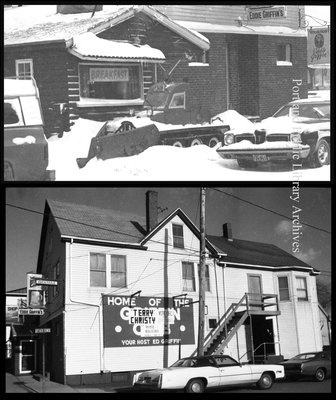 Exterior views of the Griffin Club (also known as Eddie Griffin's) pub, 60 Ocean Street, South Portland. The pub was also nicknamed The Dugout Bar, and stood at the northeast corner of Ocean Street and C Street.
The bar, owned by prominent boxing promoter Eddie Griffin, was in business from 1973-2017.

As Scott Parker told the Bangor Daily News, on 21 June 2016:
“If a fight broke out, Griffin, who excelled in boxing and basketball, would keep the peace by sending the duelers into the basement’s boxing ring. ‘Knock it off and put on the gloves,’ he would bark.

From the creaky floors to family photos embedded in the bar to the relaxed clubhouse vibe, not much has changed. You can plunk down $2 for a pint, cry on someone’s shoulder and select a song on the jukebox while perusing the sports wall of fame. And in this changing neighborhood across the bridge from Portland, that’s comforting.

‘It’s become a museum, a historical society. Kids can come in and check things out,’ said Parker, pointing to a pair of Golden Gloves from Joey Gamache behind glass.

‘Everyone is here to have a good drink, have a good time, talk, shoot the crap. There are too many of these chain restaurants now … Here you can get a 22-year-old’s opinion or a 55-year-old that’s been married twice. It’s much closer. We will miss these places if they start disappearing.’

The apartment at 21 C Street had been home to Ellen Gould Harmon White, whose visions and observations in 1844 influenced the Seventh-Day Adventist Church.

Top image: Exterior view of the pub from southwest, during snowstorm.
Photo published in the Evening Express, on 12 January 1976.

Bottom image: Full exterior view of the building from southeast. The apartment inhabited by Mrs. Harmon is on the second floor, at the back of the building.
Photo published in the Evening Express, on 4 December 1979.

A view of the bar in 1959 (known then as The Log Cabin Diner) can be seen at this link.


See Additional Files link- below- for a photo of Eddie Griffin, holding a portrait of Los Angeles Dodgers pitcher Don Sutton. The photo was taken for the Portland Press Herald, 3 August 1977.