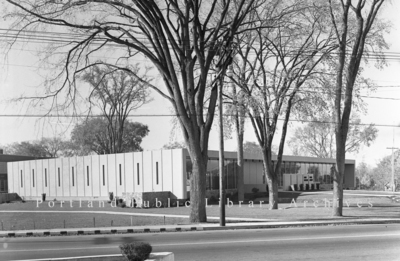 Full exterior view of South Portland Public Library, 482 Broadway, from northeast. The building was designed in 1964 by John H. Leasure, (of the architectural firm Leasure, Tuttle, and Lee) who also designed the Franklin Towers apartment building in Portland (1968-69), and the Downtown Portland Holiday Inn (1972). Library construction began in 1965 and proceeded into mid-1966.
The Library opened to the public on 10 December 1966.

Photo published in the Evening Express, on 13 October 1966.