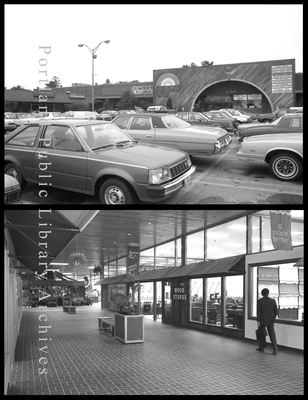 Views of the Rainbow Mall, 901 Washington Avenue. The mall was constructed on 20 acres of land from 1968-1970 (at the same time as the much larger Maine Mall, in South Portland), opening in November 1970 as the Lunt's Corner Shopping Center, and later renamed the Rainbow Mall.

The mall's flagship tenants were the Mammoth Mart (60,000 square feet), and a Martin's Shop 'n Save supermarket (10,000 square feet), connected by a dozen smaller stores. After Mammoth Mart closed in 1974, the Rainbow Mall's retail spaces struggled to compete with the prominence of the Maine Mall, as well as retail development at Northgate Shopping Center (also in North Deering), and in Freeport.

Bottom image: Interior view of the Rainbow Mall promenade.
Photo published in the Evening Express, on 2 May 1978.