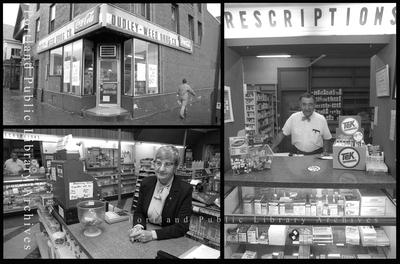 Views of Dudley-Weed Drug Company pharmacy, 46 Pine Street, shortly before its last day of business (30 Oct 1984) after 77 years. The drug store opened in 1907, as the A.S. Hinds Pharmacy had been purchased by Benjamin F. Dudley. Ernest F. Weed joined the business in 1915.
In 1951, the drug store made headlines, responding to the Civil Defense Agency's call for preparations against enemy bombings, buying the largest supply of penicillin ever sold to a Maine retail pharmacy or hospital- $15,000 worth.
The West End drug store closed as a new Wellby's Super Drug Store was opened nearby at 290 Congress Street.