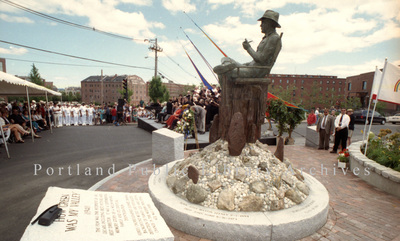 General view of Gorham's Corner from west, during the unveiling and dedication ceremonies for the John Ford statue on 12 July 1998. Born John Martin Feeney in 1894, Ford was a six-time Oscar winning Hollywood film director.

The Feeney family lived on Sheridan Street, on Munjoy Hill, and Ford's father John Feeney Sr., from County Galway (Ireland) owned a store at 42 Center Street near Gorham's Corner where the statue was placed. Ford was an alumnus of Portland High School, and was nicknamed "Bull Feeney" for his football playing style. He died in 1973, at age 79, and is regarded by many film critics as America's greatest cinematic director.

Photo published in the Portland Press Herald, on 13 July 1998